This year was a very intense one for Budapest, and for several reasons. Despite the political situation, the hardships that post-Soviet countries have to undergo, and some bad news, Budapest has experienced an incredible period of growth, one that we hope will last into the new year. Let’s look at the 5 most important events in Budapest for 2014. 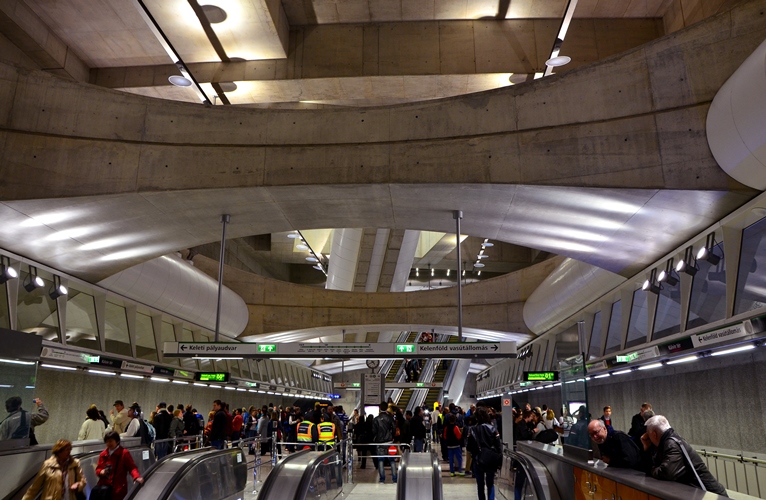 After almost 20 years of promises, scams and scandals, Budapest finally received it’s 4th metro line. Metro line 4 goes from the Keleti pályaudvar (Eastern railway station) all the way to the end of the XIth district, the most populous and the third largest district in the city. This district is not very well integrated into the BKV system, and despite so many people living there (many of them elderly), and so many important transportation hubs and landmarks that are in this district (Móricz zsigmond körtér, Etele tér, Kelenföld, etc.), there are only a handful of train and bus lines, and no metro at all. 2014 has seen this change.
This metro is also important because it is fully modern, and the stops are beautifully made, making it quite a shock to transfer from the 2 or 3 line. A very welcome change indeed.

This year the city of Budapest, already one of the greenest cities in Europe, made a big step towards a truly green future. The Hungarian oil company MOL has decided to launch a program in which bicycles are made public and accessible to everyone who partakes in the BKV (the Budapest public transportation system). In many locations throughout the city bicycles were set into special little gates, ones that could be opened with the help of your BKV pass. The new pass has a serial number that is unique to you, and so the BKV knows that you have one of their bikes. You can return them to any of the stalls throughout the city, not just the one you removed them from.

If you enter the Buda side from Pest on the Petofi bridge, or the Szabadság bridge, you will see a long stretch of garden that belongs to the Castle, but that isn’t being used for anything, and is in complete disrepair. At least, that is what you will have seen until 2014. This illustrious part of the city, with its rich history that spans most of the eras that the city has existed, is now being renovated, and although opening it was a little tricky, some parts of this massive, ancient garden are now available to the public again. Still far from a complete renovation of this historic part of the city, at least a meaningful first step has been taken.

Solving the graffiti problem that every major city has (although Budapest does have ti particularly “bad”) is always a hassle. Budapest has taken a very creative idea form 1980s America, and has made a huge success of it right here in the heart of Europe. Giving artists the means and the space to create their offerings, large swaths of the Akácfa street. known for being run down but a very popular party district- have been transformed dazzling displays of street art. The creme de la creme of the street art world has come by, with locals and international graffiti masters being present. Already some of the works that are on display are truly amazing, and the street is going to become better and better as time goes by.

One of the oldest bath houses in Budapest has gotten a fantastic new face. Not just a renovation, a complete facelift has put this small, quaint, and until now very seedy bathhouse back on the maps of people who are not just looking for a cruise spot. The Rudas used to be a run down all male bathhouse with a nasty little reputation, but after opening it to women as well, and cleaning up their act, Rudas has also finally gotten enough funding to be able to completely change the place up. The result is a must see, family friendly bathhouse that really stands up to all the big ones, but with a small, homely feel.