Nobel Biocare has been at the forefront of dental implant technology pretty much since the inception of the treatment. Their not so new, but still very relevant, and arguably most successful development in the world of dental implantology is the unique dental implant surface known as TiUnite. 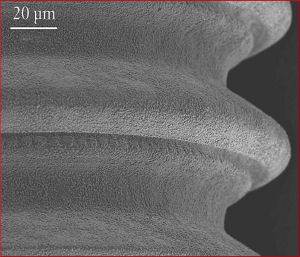 It is a porous titanium coating on the dental implant’s surface which aids the process of osseointegration, leading to shorter healing times, greater initial stability, which leads to less chances of dental implant failure, as well as less pain and discomfort for the patients.

TiUnite is a titanium oxide that is slightly negatively charged. It is made into a little bit rough, porous material by oxidizing the titanium by a process known as electric anodization, or spark anodization. This is done by immersing the titanium implants in an electrolytic fluid, which then will oxidize the titanium, and make it porous. This porous nature of the dental implant makes it osteoconductive, meaning that it interacts positively with the bone that it is placed in.

This process of anodization also makes the the surface a little bit negatively charged. This is helpful in achieving homeostasis, which is a stable state of blood flow. The negatively charged surface attracts blood palates and other elements of the blood, thus achieving homeostasis. This state is achieved in under one hour, which is an incredible feat.

The porous material allows for the jaw bone to start going into and through the dental implant, thus locking the dental implant into the jaw, essentially achieving stability as high as if the implant would be growing out of the jaw naturally. Titanium is used because this element is not recognized as a foreign body by the human immune system, so allergic reactions are ruled out, and this also aids in osseointegration, as the bone “thinks” that it is growing over something that is a part of it.