There is a new, awesome street food sensation that is sweeping the inner districts of Budapest. Keep your eyes peeled for small manually driven carts that are shaped like common Budapest transportation vehicles, like a tram, trolley or a replica of the metro cars, or of buses. These carts are loaded up with a delicious new kind of street food, and offer a fun and fresh alternative to grabbing a bite while on the go in bubbling and energetic inner city. 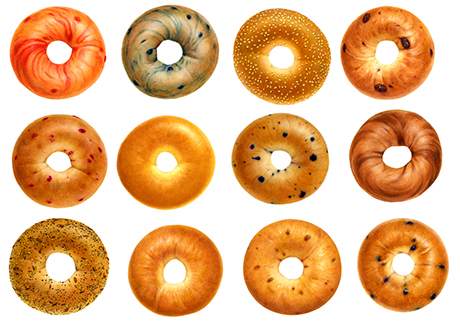 Building on the popularity that bagels are having in Budapest (they have just started popping up recently, and it was not a moment too soon, either), the bakering is a patented new kind of junk food. It is a bagel that has a rather largish hole in the middle, and is filled with different kinds of delicious stuffing. There are pizza, ham and cheese, goats cheese, but also plum and cinnamon and many other flavours. The bakering website even has a create your own and they take suggestions of what kinds people would like to see in the future.

Where to find them

This new fast food craze really has all of the things necessary to make it an enormous success: they have a new, tasty treat that is marketed mainly by its appearance and its mode of delivery, and is in the most tumultuous epicentre of the city, meaning it reaches most people. They even had to get a special kind of permit specifically made just for them to be able to sell food on the street, while mobile (until now establishments run out of cars and carts had to be stationary). They can be found throughout the 5th, 6th, 7th and 1st districts and in certain parts of the 8th as well. You can also find where a cart is at any given time by looking on their website. They have an interactive map that tracks the carts so you can walk by and pick up a bakering whenever you feel like it.

Aside from the bakering, the carts are also stacked with beverages, water and culinary specialties like trail mix and banana chips and chocolate bars as well. All of this is offered for a very reasonable price, roughly how much it would cost for you to go to a store and buy something similar. All in all a novelty of Budapest that is new, trendy, and offers good food at a really good price.