One of the most beautiful parts of the city, and one of the most famous sites is the Citadella (the Hungarian word for citadel). It has a very interesting history, and is loved by all who visit it. Now that the weather is great again, it is the perfect destination for a late afternoon stroll, and the sunset from the top of the Gellért hegy with the entire city sprawling below it is one of the most beautiful sight sin the world; UNESCO has deemed it a world heritage site in 1987. 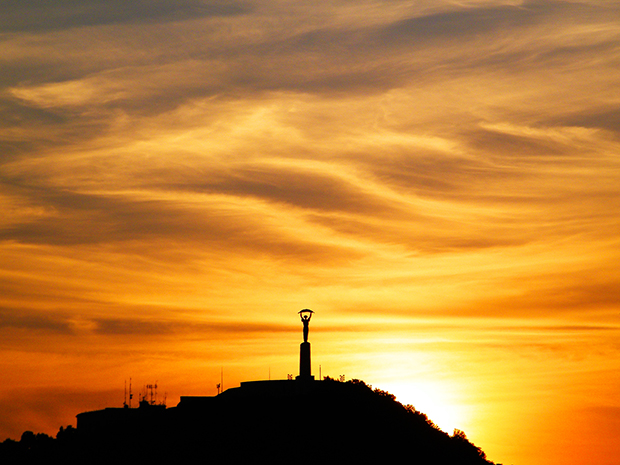 A symbol of oppression

Originally, the Citadella was built as a symbol of oppression, and a reminder to the Hungarian people that they have been conquered, and had better behave themselves, or else. In 1848-49 there was a massive uprising against the Austro-Hungarian Monarchy and the tyrannical Habsburg rule, as the Hungarians had been brutally suppressed by that point for a century or so. The laws prohibited nobles from speaking their own language, form teaching in Hungarian, and so a national revolt was fomented amongst the poor. The revolution was beaten down, many were killed, and the Habsburg decided to raise the Citadella in order to remind Hungarians of their military might, and to stop future revolutions, as they saw that the Hungarians were “prone to rebellion”. This was done by 1854, which is record time considering the technology available at the time.

The impressive mini fortress is a 220 meter long, 4 meter thick and 60 meter high stone wall with spaces in it for 60 cannons, which was a formidable military powerhouse in its day. It is a U shaped affair, and has extensive catacombs underneath it, which now house several photo galleries and historical exhibits about the military history of Budapest and the Citadella (as it was used in all of the major wars to come).
One of the most favoured tourist destinations
The Citadella refers only to the citadel on top of Gellért mountain. This is one of the most popular tourist destinations, along with the rest of Gellért hegy. This small hill has the Hungarian statue of liberty from the communist days, the cave church of the Sacred Heart, and of course the Citadella as well. The view from the Citadella is absolutely stunning: you can see all of the Duna corso, both sides of the city, the Buda hills, the Buda castle, and of course the Danube itself. The Citadella has been owned by the city of Budapest and used as a sightseeing location since 1859, and is one of the main attractions in this city to this very day.