Cancer awareness and positive, inclusive attitudes towards people with terminal diseases are becoming more and more widespread. This is a natural consequence of an overall more inclusive mentality pervading our culture, especially the younger generations. Instead of being shunned as social pariah and unwanted baggage to their families, people suffering from interminable diseases are now cared for especially, and are enjoying what remains of their lives with much less discrimination and blind ignorance as previously. 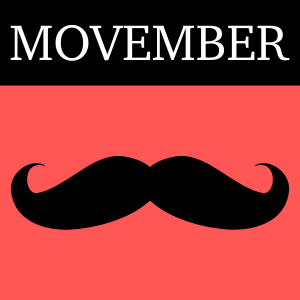 November was picked as cancer awareness month, and mostly people focus on cancers which are especially heinous and difficult to deal with, cancers affecting gender. Prostate cancer and breast cancer are absolutely preventable and easy to deal with, and kill more people then necessary. This is due partially to the fact that there is social stigma associated with having one breast, having a tumor on the breasts, or in the prostate. The exams that can screen for this kind of cancer are almost always unpleasant and at least somewhat degrading or at least conceived of as being dirty. Movember was thought up to put a stop to this, and to raise awareness of these cancers, and of the dignity and humanity of the victims suffering from these kinds of cancers. Men are encouraged to grow moustaches, thus raising a very physical sort of attention to the plight of cancer patients, as a man with a moustache is quite different looking than a man with one.

The prostate is sometimes linked to a time bomb in popular cultural, and while that is a pretty pessimistic view of a part of your own body, it is a little too close for comfort. Cancer occurs when a cell in your body goes renegade; after being replicated and reproduced for the manieth time, something goes wrong, and the cell will start to propagate life on its own terms, thus causing cancer. The prostate is one of those parts of the human body that never stops growing, and thus the possibility of a new cell becoming cancerous are higher, as there are constantly new cells being made.

Although October is breast cancer awareness month, a lot of that awareness is carried over into November, which is usually thought of as the cancer awareness month. Breast cancer affects millions of people, and while it can be easily treated with a mastectomy (nowadays lumpectomies are more common, as they remove “only” the portion of the breast directly affected by the malignant tumour), most women are simply devastated by even the thought of amputating one of their breasts. Mammograms are available for free in many places, and during the months of October and November, many private clinics will offer these services for free. Reconstructive surgery is also getting better at dealing with breast cancer survivors, and new grafting techniques can, in some cases completely restore the breast.