Soup- in England, as in much of the Western world, an appetizer, maybe a hearty broth, but definitely foreplay to the main event, which is usually a giant hunk of meat prepared in one way or another. In Hungary it is a little bit different- often enough, soup is the meal in and of itself. Many times soupis os thick and hearty, and prepared in such abundant quantities that it is literally the only thing on the table. Soups can be any part of the meal, too- some soups are only good for starters (like cumin seed soup, or egg drops), while others are the main course (like goulash or the famous Jókai bean soup), not to mention stews and főzelék, a special thick stew of vegetables, but soups can be desserts too- our fruit soups like cherry and peach soups are sweet and delicious, the perfect ending to a light summer meal. In this article I wish to talk a little about the role of soup in Hungarian cuisine. 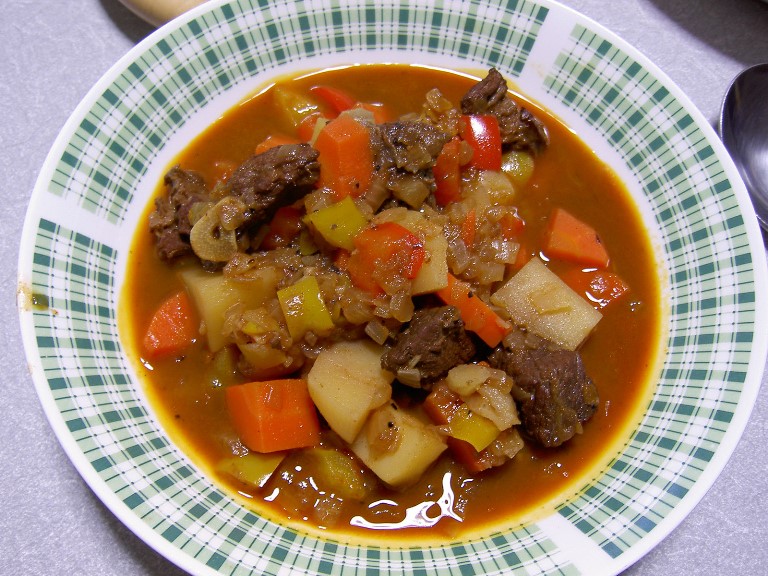 A British friend once told me that he had strange experience in Budapest- he was brought soup out twice! Of course, he had a starter and a főzelék. This is not a soup but is eaten from a bowl and is quite thick. These are usually made out of prime vegetables when their season is on, like squash, peas, potato, savoy cabbage, and pretty much every other vegetable out there. The stew is thickened either with “rántás” ( flour mixed with oil or fat and fried up with spices), or “habarás” (which is sour cream with spices).

Many soups are hearty enough to be classified as a meal in and of itself. The most famous Hungarian food for instance is the goulash, which is properly written Gulyás, and means cow herders soup. Aside from this noe and the aforementioned absolute favorite, the Jóükai bean soup, many kinds of hearty soups exist, most are with emat, but many are vegetarian. The Újházy chicken soup, Legényfogó soup, Lebbencs soup and Bakonyi soups are all delicious and will leave you satisfied.

Usually made of a single ingredient, or featuring a single ingredient prominently, these are the kinds of soups that Europeans are used to: thin, some veggies floating about with some main ingredient, frequently also plant based, and some nice spices. We have these as well; many vegetable soups, usually referring to the season they were being cooked (summer soups, winter soups, etc), cumin soup, egg soups, tomato soup, and many cream soups as well.

These strange and foreign soups are usually made out of a single fruit, cream and some water, and of course plenty of sugar as well. Only a few fruits are ever made into soup, like apple, plums, cherry (the most famous one), gooseberry, peach and strawberry.

It goes to show that many of these soups are not Hungarian in origin, but what a culture absorbs from its neighbors is very telling of what that nation is like, and Hungarians, without a shadow of a doubt, are a soup nation.