The Erzsébet square has long been a meeting ground of young people, and has become the definitive City Centre. The arrival of the Budapest Eye has strengthened this position of the small central square behind Deák square. Aside from a mini skate park, one of the biggest and definitely most diverse clubs of Budapest (the Aquarium), the beautiful new walking path on the square itself, visitors now have one more reason to make their way over to Erzsébet square and brave the crowd, and that is none other than the biggest ferris wheel in the country, and one of the biggest ones in Europe. 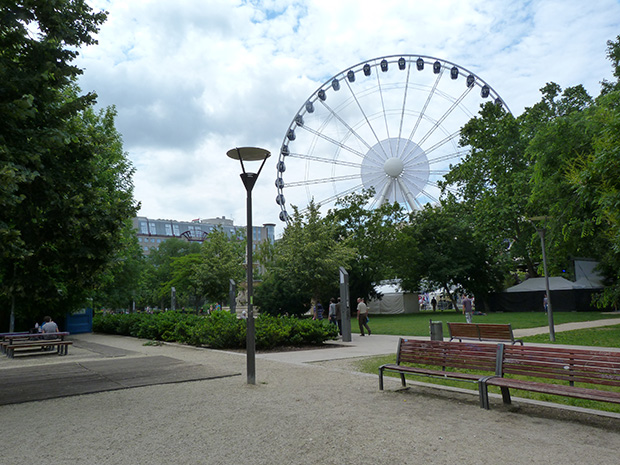 The Budapest eye is naturally a copy of the London eye. The main purpose of this giant ferris wheel is none other than to provide anyone who pays the entrance fee with a startling and jaw dropping view of the city from above. This city was not planned, but arose naturally, and this organic clashing of eclectic architectural designs and parts of the city is truly an incredible sight to behold.

The Budapest Eye is a travelling ferris wheel. It has been in Paris, Milan and now finally, has reached the Hungarian capital. The ferris wheel is 65 metres tall, and has 41 air conditioned cabins on it, with a maximum capacity of 332 people in total. The cabins can hold up to 8 people, while the 4 VIP cabins can hold 4 people each. Tickets are 2 400 for 10 minutes of time for adults, and 1500 for people under 140 centimetres. The wheel runs until midnight, so you can come on by at literally anytime. The wheel is operated by a magnetic system, and is thus completely soundless.

During the time of the Sziget Festival (the biggest and most populous music festival in Central Europe), from the 10th until the 17th of August, the eye will be transported to the festival grounds, which is always held on the Hajógyártó sziget, an island in the north of Budapest. There it will function as usual, with the same sort of conditions as noted above.