Főzdefest: The Festival Of Hungarian Beer

If you have ever been to Hungary, then you might be well aware of how incredibly mediocre the beer is. There are only a couple of brands, they all taste the same (3 on a 5 scale at best) and are drinkable swill that is really nothing much to write home about. The new generation of Hungarian entrepreneurs are fed up with this, and, riding on the shockwaves of the microbrewery revolution in the West, have started their own small scale breweries that make delicious IPAs, good honest stouts, red, brown and even black beer galore, not to mention delicious flavoured beers and the bread and butter of the brewing industry; a smooth, good tasting lager as well. Főzdefeszt is their festival in which they hope to popularize small scale beer production, and lift the culture of beer drinking in Hungary out of the gutter. 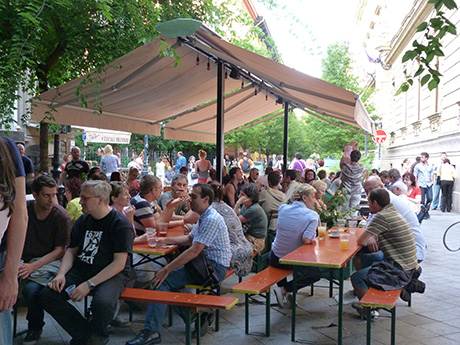 For nearly ten years now, the small scale revolution of the Hungarian beer market has been under way. Many small breweries and artisans interested in brewing have been producing  real beer and ale, and have done so with the purpose of destroying the current hegemony of poorly made, tasteless and mass produced beer that everyone is guzzling. They have been so successful that they even started a microbrewery festival in Berlin, and that has been attracting international attention since 2013.

Since then, a few bars have opened that cater exclusively to the small scale premium beer market, and two of them are the main sponsors of this festival, namely Élszető and Léhűtő. These bars are open all year around, and you can sample the best beers from the most talented microbreweries in Hungary.

The kind of beer you will see here is all small batches, all microbreweries, and most of them are handmade too. Aside from tiny labels running beer, there are also some people who are just themselves, without labels, making a few casks a year, and selling them only at this festival.

This year the location will not be one of the three bars that run craft beers, but seeing how popular the previous few years have been, they decided to move it to the largest park in Budapest, the Városliget. In this park there is a road called the Olof Palme sétány, and this will be the home of the festival in 2015. Many stalls and many kinds of beer will be available, as well as information and equipment for home brewing for those who are interested.