The Healing Waters Of Hungary

Hungary is a central place for thermal waters and for baths, and has been for thousands of years. The unique situation of Hungary is that the entire Carpathian basin in which the country is located is saturated with thermal waters underground. The area near the Danube, where hills are thrust up is particularly rich in these kinds of waters, and the Hungarian capital is built in just such a place, with the Danube bisecting the city. This is where the best bath houses on Earth can be found; not just the bets because of the structures and the ambience of the places, but because of the quality of the water, which is completely unique in all of planet Earth. 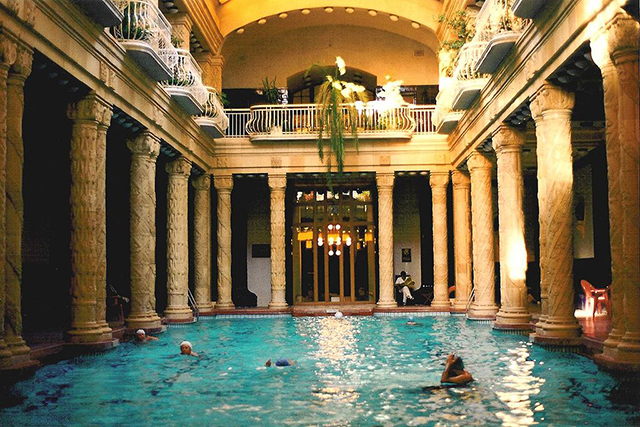 The bathhouses have had a long and serious tradition in Hungary, dating back to the Roman empire. The Romans worshipped natural surroundings, believing that minor deities lived in rivers, waters and lakes, and they thought that the thermal waters of Noricum and Pannonia were in effect a gift for the tired fleet from the Gods of the waters. Later on many other Empires would soak in the waters of the Hungarian capital, and here are two bath houses that have survived many a historical catastrophe and are still open to the public today. They are definitely worth a visit, as the healing waters can speed up your healing time and can aid the blood and the circulatory system, and help your immune system in fighting off opportunistic infections of all sorts.

Located at the foot of the Gellért Hill, this enormous Hotel and Spa has been open since the time of the Monarchy, and the interior and exterior of the complex still reflects this long and rich history. The entire place is full of pools of alabaster and marble, with beautiful statues, enormous rooms and bathing spaces, and of course, some of the most potent waters in Europe.

Makeup of the water

The healing properties of the waters are not just ancient superstition; it has recently been scientifically proven. Chemical analysis of the thermal waters of the Gellért hill yielded that there were high levels of Iodine, Bromine, Lithium, Calcium, Magnesium, Nitrogen and Fluoride, with trace amounts of Chlorine, Sulphates and Metaboric acid. The water has been scientifically proven to relieve symptoms of arthritis, vasoconstriction, asthma, spinal problems and back pains, and of course aids in healing.

Another ancient and much revered bathhouse is the Lukács, located on the same side of the Danube, in roughly the same place as the famous Gellért spa. This is a smaller establishment, but much more friendly, with beautiful pools and amazing decorations and mosaics as well. The place is beset with age, and is one of the oldest bathhouses of the country. It si rumoured that the place was first a Roman bathhouse before becoming a Hammam in the 16th century under Ottoman occupation, and after that being restored by the Monarchy.

Makeup of the water

The water has high levels of fluoride, calcium and hydrogen carbonates as well as chlorides and sulphates. The water has been proven to be good for hernias, and the water is particularly good for healing bones and setting them straight, as the high amount of calcium and carbonates does good for the bones. This water can also be bought bottled and can be consumed, where ti can really help, as the water contains such low levels of sulphates. This water is frequently used as a physical therapy aid.