Budapest has a lot of derelict buildings and abandoned spaces, as the city has been rebuilt so many times. It is absolutely understandable that sometimes even large swaths of a city will be left empty after it has served its purpose. Budapest has been experiencing steady declines in population for almost a century now, leaving many old buildings of various shape, size and quality empty and unlived in. Many of them are beautiful art deco buildings, or even older ones from the Monarchy, and many are indeed Soviet bauhaus monstrosities, too. What can definitely make them look better though, is art. This is what the Színes Város initiative is about. 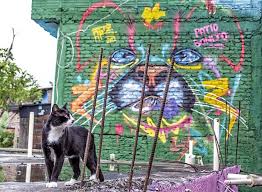 The name Színes Város means colourful city, and indeed that it what this project is about. The space which it uses is a busy street in one of the more mouldering areas of Budapest, Akácfa utca, located on the bridge between the 7th and 8th districts, starting from Blaha Lujza square and going well into the 7th. This is a tight space full of buildings built on atop the other, and it can seem suffocating and nasty at times. The perfect place for the artistic mind to roam free and transform the landscape.

The municipal services of Budapest have made Akácfa utca fair game to graffiti artists worldwide, and are even handing out prizes and raffles to the best pieces. Many international champs already have claimed a wall or two, but the prospects seem to be absolutely endless. There are just so many firewalls, sides of buildings and just walls in the middle of empty lots, that it will take years to finish the project.
Ideas are not limited to just traditional graffiti either, any medium is welcome, and many people have decided to use mosaic as their preferred medium, with some stunning results. A movie has also been made about the initiative, as well as about some of the enormous works of art that have unfolded on this most unlikely side street.

How to get there

Blaha Lujza tér is a central transportation hub, with almost every trolley stopping there, as well as the 7, 107, 13 and 233 buses. The red metro (line 2) also stops here, as does the 4 and the 6 tram. Many smaller lines, like the 99 bus, for instance also stop by here, and almost every urban bike route at one point feeds into this place. Akácfa uca is the street that opens from Blaha Lujza tér, and it begins at the Burger King, going inwards into the 7th district.