The shedding of teeth is an important moment in a child’s life. It is one of those milestones that we all must pass through, like puberty and sexual maturation. An important milestone, a step closer to becoming an adult. It is thus hardly surprising that different cultures have different ways of dealing with these teeth, but all cultures seem to agree that these teeth are significant. Most cultures have some kind of creature that takes these teeth away, and gives rewards for kids when they do. In Finland, it is trolls that do this, other places have angels and specific creatures who deal just with this. In the Anglosphere, we have the tooth fairy. 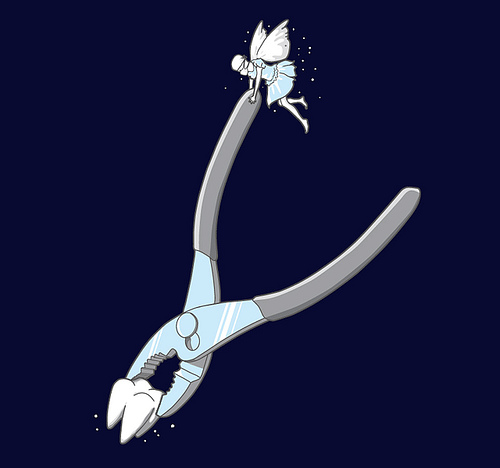 The tooth fairy can be traced all the way back to the days of proto-indo european. All of the first major works of indo european speaking people seem to mention the existence of a tooth collecting creature who hands out rewards.

Fairies are thought of as whimsical creatures who cause mischief, and can be good or bad depending on who they meet with. They turn milk sour, they kidnap babies, but at the same time, they leave money for children’s teeth, bless homes and can help find lost things as well. They are capricious, mischievous supernatural children, essentially, and were used at first to explain the whims and mysteries of the natural world, and late ron were probably kept around to intimidate children. The fairy responsible for taking the teeth of children and leaving money underneath the pillow for them is called the tooth fairy.

This is the prefered method of tooth disposal now, to pay your kids for their teeth. In many households, the children know it is their parents leaving the money for them, but the teeth need to be disposed of just the same. Parents will offer money or candy in return, and although many kids know it is their parents, there are still several households in which the myth of the fairy is kept around for the sake of entertaining children and making them use their imaginations.

Before the tooth fairy became popular, many different things were believed about milk teeth, but one common theme goes all across the European world; milk teeth possess special, arcane powers. For many people, like the ancient Greeks, the custom was to keep them and give them to the child when they reach adulthood, this way they can go to the afterlife with ease, otherwise they will spend an eternity looking for their lost teeth. The Vikings believed that the teeth of children, specifically your children brought luck and good fortune to those who possess them, and so they made trinkets and ornaments using baby teeth and wore them to battle. Many people buried or burned the teeth when they fell out. This was done either as a way to free the child from childhood and help them on their way to adulthood, or sometimes it was believed that the teeth can be used to place a curse on the child, and thus by destroying or burying the teeth, they will not be found by mischievous sorcerers.