The recent refugee crisis has bought a lot of attention to Hungary, where a massive mishandling of migrants has taken place. All over the world, television screens were filled with scenes of crowded train terminals in Keleti and Nyugati railroad stations. These train stations are some of the most beautiful in the world, and are marvelled at even when not the site of a humanitarian crisis.

There are three main train terminals in the city of Budapest, one going South, one going East, and one going West. Two of them were built in the 1800s, and one in the Soviet era, and all are pretty magnificent. Let’s take a look at these tourist attractions.

Keleti, the Eastern railway station is the most important railway station in Hungary, with the most international commerce and transportation. It is the busiest, and used to be the only train station that sent trains abroad, to the Balkans and Romania mostly. Nowadays it is where most trains come to. The railway station was recently renovated, and the square in front of it, the underpass and the main building of the train terminal, built in 1884 by Gyula Rochlitz. It is a beautiful building, very reminiscent of the grandiosity and architectural styles that made the Austro-Hungarian Monarchy famous. The train station stands 43 metres tall, and is decorated with a number of marble statues; Mercury, messenger of the gods stands not far from James Watt, inventor of the steam engine, and George Stephenson, who is understood to be the father of rocket propulsion, and is the engineer behind the Rocket train. 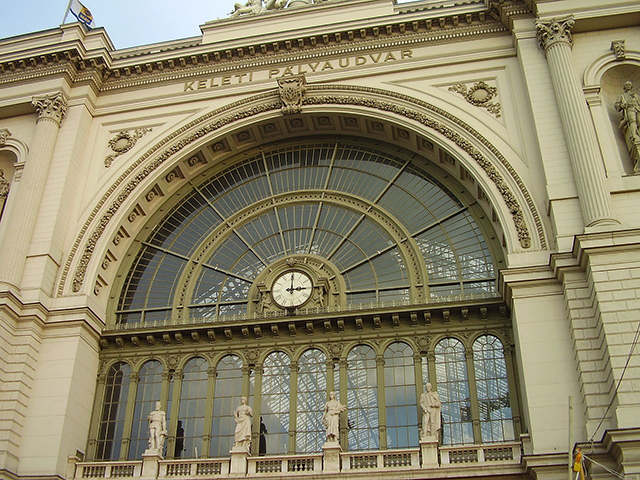 The second oldest and most beautiful, ornate train station in Hungary, and one of the most beautiful in the world is the Nyugati railway station. Built in 1871 by Eiffel, the same man responsible for the eponymous tower in Paris, the Nyugati or Western railway station is 23 metres tall, has 17 tracks, and is 125 metres long. The roof is made of glass and wrought iron, and is considered a heritage sight and has been declared a monument.

The oldest train station is the Déli or Southern railway station, built in 1861, but this cannot be told from looking at it. The entire train station was rebuilt in the 70s in typical Soviet fashion, and looks like it is for that time period. The concrete and glass monstrosity that now looms in Southern Buda is best known for its trains running to Balaton and to the Balkans.