Dental tourism Budapest FAQ 3.: What A Dental Tourist Does In Budapest When Not In the Chair

There is so much to do in Budapest because, to many observers, Budapest is actually two separate cities bisected by the River Danube. Looking north, on the left bank (west bank) is Buda, to the right (east bank) is Pest. Each offers great opportunities to experience the ’’Pearl of the Danube” which Budapest is often called. Either way, either side, you will find something to delight you-from historical sights, spas, art and antique galleries, and museums.

Keep in mind, this is only a partial list.

This iconic structure astride the Danube on the Pest side often ranks as the top attractions in Europe—if not the world. Hint: It is breathtaking when viewed at sunrise or sunset from the Buda side of the river.

Heroes’ Square (Hosök tere), which marks the end of the famous Andrássy Avenue is home to an iconic monument which features depictions of the Seven Chieftains of the Magyars, who are believed to have led the Hungarian people from central Asia to the Carpathian basin. Atop the central pillar is the Archangel Gabriel, who is holding the Hungarian crown. Art galleries bookend the square.

Margaret Island is a “must visit” 2.5km long island which sits in the middle of the Danube, which is covered in parkland and recreational facilities. A rubber-coated 5.5 km running track encircles the island, and is a popular jogging spot for runners who want to get away from the hustle and bustle of the city. One of the most famous features of the island is the “music fountain”, from which water regularly “dances” in time to classical music. Other notable features on the island include medieval ruins and small aviary which primarily caters for injured water birds and wildfowl.

The basilica is one of the most important religious buildings in Hungary, and visitors to the reliquary can see the (reported) right hand of Stephen, first King of Hungary. As this is a holy site, visitors who plan on entering the church are asked to keep their knees and shoulders covered. Those with a head for heights can travel up to the base of the dome and look out over the city. On a clear day, this is a great vantage point from which to survey Budapest from the air. Classical music concerts and organ concerts regularly take place inside the Basilica, and spill out into the square outside.

This Neo-Renaissance building was first opened in 1884, following a commission from Emperor Franz Joseph. Outside of the building, you can see statues to Ferenc Erkel (composer of the Hungarian National Anthem) and Ferenc Liszt (Hungarian composer). The 1200 seat auditorium is considered to be one of the best in the world for operatic performances, and it is well worth it to buy a ticket to a show. As it has been under renovation, check for availability.

Although the Fisherman’s Bastion looks like a medieval monument, it was actually built in the early 20th century in a neo-Gothic style, specifically to act as a panoramic viewing platform across the Danube, Margaret Island and Pest.
It is named after the Guild of Fishermen, which was responsible for defending that stretch of the city walls during the Middle Ages. The seven towers of the Bastion represent the seven Magyar tribes that helped to settle the Magyar people in the Carpathian Basin. Come at sunset to see a particularly beautiful view of the city.

This synagogue is currently one of the largest in the world outside of Israel, despite the fact that Hungary’s Jewish population was significantly depleted during World War II. The interior and the garden were restored in the 1990’s, with much of the funding coming from the Hungarian Jewish diaspora population worldwide. In the garden, you can see a weeping willow memorial, whose metal leaves bear the names of some of those killed during the war. There is also a memorial to Swedish diplomat Roual Wallenberg, who helped to save hundreds of Hungarian Jews from concentration camps and ghettos.

The Great Market Hall in central Budapest is Budapest’s most famous marketplace. Whilst many locals still use the market hall as a place to buy their groceries, the market is incredibly popular with the tourists too. Locally grown fruits and veg, and locally sourced meats are found on the lower floors, and souvenirs including lace, chess sets and leather goods are available in the upper floors. As well as individual ingredients, it is possible to pick up homemade local delicacies like goulash and langos from the food stall upstairs.

The Buda Hills are one of the greenest areas of the city, and are very popular with Budapest citizens who want to take a little time away from city life. There are various hiking trails to follow and mountain bike paths as well, which range from easy to medium level of difficulty. For those who want to explore the hills in a more leisurely fashion, visit the Children’s Railway, which is entirely staffed by children, aged 10-14, (with the exception of some adult staff who are responsible for safety). There are plenty of picnic spots dotted around so that you can enjoy a lovely packed lunch.

The City Park is a wonderful leisure facility for the citizens of Budapest, and includes sports facilities, swimming baths, and a boating lake. During the winter months, the boating lake is transformed into one of Europe’s largest ice rinks. The park is also home to the Budapest Municipal Zoo and Botanical Gardens, the Budapest Circus and the Vajdahunyad Castle (housing the Museum of Hungarian Agriculture). Just outside of the park you can find the Time Wheel, which is one of the largest sand timers in the world.

The Liberty Statue on Gellert Hill is one of the few prominent Communist statues which remained in situ after the transition to democracy, in part because of its iconic location overlooking the city. The statue was first erected in 1947 to commemorate the Soviet troops who lost their lives liberating the country, however the engraving was later changed so that it commemorated “all who sacrificed their lives for the independence, freedom, and prosperity of Hungary”.
The Citadel, which sits atop Gellert Hill, was constructed by the Hapsburgs following the failed Hungarian War of Independence. It was thought that its prime strategic position would make it easy to control both Buda and Pest, should any future uprisings occur. The panoramic views from underneath the entire area are unparalleled, and help to make the walk to the top of the hill well worth it.
Of course, no trip to Budapest would be complete without a stop at one of the dozens of thermal spas which dot the city both in Buda and Pest. And this list is only a sampling of what is in store for you when you make Budapest and Forest & Ray your dental tourism destination. Hope to see you soon! 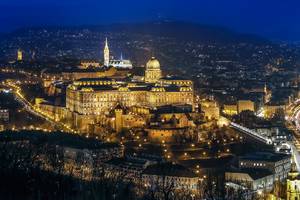 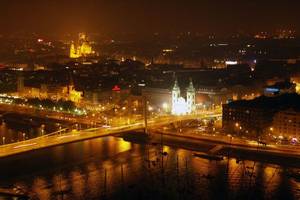 Dental Tourism FAQ Part 1: The First Question Is WHY?

How Well Do You Know Your Teeth?